A Tip For Introducing Your K9 To Dogs Off Lead

It’s hard to feel sociable when you are forced into a corner. It’s much better to meet and greet on even and neutral grounds, where both parties are free to leave at any time. 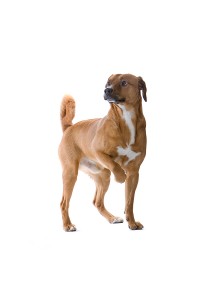 When the heat is on, dogs have a built in mechanism commonly known as ‘Fight or flight’, which they respond to. They will always choose flight if available, to avoid confrontation and will not fight unless they cannot escape first. In this way they can deal with their natural curiosity without resorting to violence at every occasion.

Next time you see a dog with it’s front paw up and motionless like a statue, then get ready, you could have a fight on your hands. This kind of body language is a dog’s way of saying, “I’m really not sure what to do right now and I’m really nervous”. It’s a demonstration of insecurity. Size doesn’t matter and breed doesn’t matter. When dogs feel insecure they display a warning that looks just like aggression to another dog and trouble starts.

It would be great if dog’s were sympathetic and could put themselves in the ‘paws’ of another dog, to understand why they may be feeling a little insecure being tied down by a lead. But they’re not ever going to. Full stop. So you need to understand what the consequences will be if either dog feels trapped and insecure. Usually a scuffle, rarely a fight to the death – but a trip to the vet at least.

If your dog is a Pit Bull then it is still going to react in the same way. A Pit Bull doesn’t know it’s a Pit Bull, it will protect itself the best way it can, fortunately for the Pit Bull it is endowed with a genetic advantage over most dogs but this is not a conscious self-awareness. Your Pit Bull feels just as insecure as a Poodle or Pomeranian or similar creature.

When your Pit Bull starts to beat up other dogs it will do this as a habit rather than as a conscious decision to dominate other dogs. Not letting your dog beat on other dogs will avoid this behavior from the get go. If every time your dog meets another dog it walks home happily it will expect to do the same on every single occasion after that. That’s the kind of history lesson you want to give your dog.

Having both dogs off the lead when they meet will avoid this behavior in nearly all cases. I always advise that people let their dogs meet each other while they are off the lead. If this is not possible then no meeting takes place. The dogs will not be allowed to come near each other unless they are both on neutral ground and are free to ‘flight’ if they choose to.

If your dog is on the lead and is approached by a stranger’s dog off lead. Take your dog off the lead ASAP, before the free dog approaches giving your dog the ability to meet the other dog half way.

In Summary – Dogs are naturally sociable with each other and won’t be aggressive if they don’t feel they are threatened or backed into a corner. A free dog is a relaxed dog.