How To Use A K9 Tug Like A Pro

Every dog has its favorite toy or treat or game or something that just drives them wild. 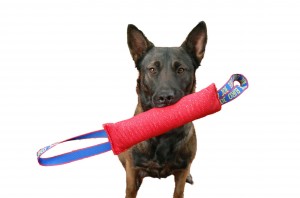 The higher the drive the better the working dog you will have. But having a huge drive in your dog can be like giving a NASCAR car to a Learner driver. If you can’t control your dogs awesome power it will cause you to think your dog is just plain crazy or just stupid and you will soon lose respect for your dog.

The Pros love a dog with huge drive because they know how to harness it. They know that the dog with a huge drive will perform excellently 99.9% of the time. The pros even try to build the dogs drive up to limits that would just be unreasonable and uncontrollable for your garden-variety domestic pet and well beyond the capabilities of the majority of dog owners. The Pros love to get their dogs craaazy!

How drive is raised is described in another article but for now I want to tell you how they control the super driven beast. The Pros use a Tug. Dogs love to bite and they will bite to express and release frustration and to express themselves. If a dog is happy it bites and if it is sad it bites and it bites to express every feeling and emotion in between. So a tug is used as something that the dog can bite with no negative implications. In fact, a bite on the tug is used as a reward.

When the dog obeys a command the dog is allowed to bite. The bite is the reward. If the dog is ‘going crazy’ then a command is given, for example ‘sit’. As soon as the dog sits the dog is given the release command and then the dog is presented the tug to bite. In a nutshell this is just how the Pros keep control of a highly driven dog. The tug builds discipline. The dog knows it will have to control itself if it is to be allowed to bite the tug. No self-control = No bite. Seeing that the bite is what the dog wants more than anything in the world at that time the dog will really dig deep to control itself. When the dog is using every ounce of brainpower to focus on earning that bite, it is very easy to control a dog that would appear to be insane.

Have a look at learning as much as you can about building drive and using the tug. If you learn how to use a tug as part of your training or exercise program then you will see a massive difference in your dog’s attitude to you and its drive to work for you. But be careful dogs do go crazy for them so you’d better know how to control the monster that you have created.

In Summary – Use a tug as training tool. The bite is the reward for demonstrating obedience but more importantly, self control.